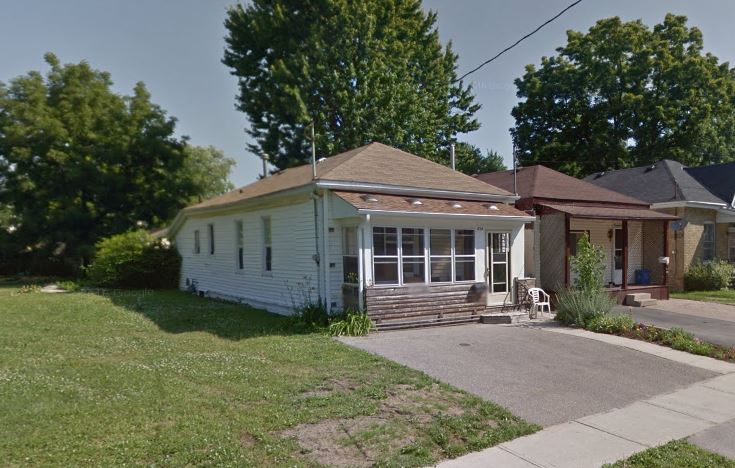 This was a fantastic project that helped me to learn a lot about the business of home renovations. The big takeaway from this project was learning how my investor used RRSP funds to lend me a mortgage, just like a bank, and make an excellent return tax-free.

I also used an investment strategy called BRRR(R), which stands for Buy, Renovate, Rent, Refinance (and Repeat!). This is a powerful strategy that is used to preserve your capital while building equity in a rental portfolio, I’ll explain…

I discovered this house from  lead I received after offering cash rewards for any lead on a house that led to me purchasing it. My bird dog was happy to make some money and I was happy to have another deal locked up.

The owner of this house was a hoarder. She was ninety years old, living on her own and had already paid to downsize to an apartment the next week. There was a sixteen inch path to each of the rooms, but the house was otherwise full. The operation of getting this house market-ready was too much for her and the family, so she needed to be rid of the burden. I offered to take the house as-is in 14 days and turn her problem into my problem. She was relieved!

This house needed to be emptied out. Ten thousand pounds of garbage was hauled away in two fourteen-yard bins, a ten yard bin a twenty yard bin, and a couple extra trailer loads. Yes, ten thousand pounds. But when the mess was clear I was very happy with what I had bought! Built in 1882 this house was in need of major updating, but was generally well-built.  The plumbing and hydro were all modern and the attic had blown insulation.  No need to touch the renovated bathroom and the windows were all modern. There was a little slope to the floor, but otherwise this house was in good shape!

The floor was leveled up and the walls were patched and freshly painted “2017 House Flip Grey”. We installed subfloor, flooring, trim and interior doors. The interior was brightened up with LED lighting to show off the renovation. The kitchen was painted and new hardware installed to freshen it up. No more pale yellow flower patterned counter top.

A few other touches and we’re rent ready!

I listed the house for rent and I received quite a few calls as long as I paid to boost my Kijiji ad to a “Top Ad”. Pro tip: The ROI on “Top Ad” is astronomical. Pay for it until the lease is signed! That brings up a VERY critical topic in landlording: Tenant screening.

Tenant screening is, unarguably, the most important factor in profitably landlording in Ontario. I screen prospective tenants very hard. I take my property management role very seriously. The wrong tenant can cost tens of thousands of dollars and their marauding is fully supported by the system established by the Ontario  government. I’ll write about my 5-step screening method some other time.

Before I had the property rented I called my bank to have an appraiser out to refinance the house. This is the critical step in the BRRR(R) process. This is the make-or-break moment. This one’s for all the marbles, and by “all the marbles” I mean all of my invested money.

The goal of a BRRR(R) is to end up with a house with a 80% loan to value mortgage from an ‘A’ lender, having put $0 or less into the deal. Who says you need money to buy real estate?

So what does this mean? Why the exclamation point after that number? Well, here’s the math:

Wait what? Negative two thousand dollars to buy a house? That’s not 20% of anything. You can’t do that!

What’s the ROI on that? You can’t calculate the ROI on a negative investment. I’m getting R, but I didn’t pay any I. This is the most powerful concept that I am aware of in real estate. By buying right and adding value, you can finance all of your investment out, so you can do it all over again.

But that’s not the best part. The best part is that appraisals are generally lower than sales value. However, lets say my disposition cost brought me down to $130,000 in pocket. That still means that I’ve just created $28,000 in equity.

You make your money when you buy!

Read my article here on why you shouldn’t be shopping on the MLS with a Realtor.

What about the rental? After a month of vacancy due to the area not bringing the greatest of prospects (screen hard!) I found the right tenants and I’ve offered them a good product at a good price. I believe they are happy with the house and I’m happy with them!

I’m also happy with my cash-flow.

Of course there’s an eventual furnace, roof, maintenance, vacancy, etc to subtract from that number (Read my article on why buying condos is not as bad as everyone thinks), but I’m still left with a long-run $200+/mo on a house that I paid -$2000 for.

What went wrong? I spent entirely too much time trying to find things that in that house that I could sell to salvage some value. Next time I’ll be far more heavy-handed with disposal. Time is money.

What went right? I learned that my laborer Shawn Sackaney is also a very skilled painter. Be sure to check out his website for any London painting needs you may have. It was such a refreshing change to employ someone who has my best interests at heart. When I was given that kind of effort and consideration, I felt guilty when the job was done because I hadn’t found another job for him to work on! I’m sure you’ll hear more about Shawn as we continue to work together.

What did I learn? Private lenders are amazing. You might hear 12% interest, plus 2% in fees up front, plus the legal and lending fees associated with the private loan and you may think that’s extortion. But if you set aside the emotion generated by numbers and realize that the deal still works, and without this lender there is no deal, then it becomes clear. It isn’t important how much someone else makes! What matters is that your deal makes sense to you.

What people are saying